Skyline Gazing: The Most Iconic Modern Buildings of Beijing

Though a trip through Beijing has plenty of historical architecture to offer, the city’s skyline also holds many feats of modern design. However, unlike Shanghai, where most of the great structures are gathered around the Pudong bend to be viewed all at once, Beijing has spread out its contemporary landmarks throughout the city, making it difficult for architectural enthusiasts to sneak a gander at all of them. Therefore, we decided to gather them all into one place. Here is our list of Beijing’s most iconic modern buildings: 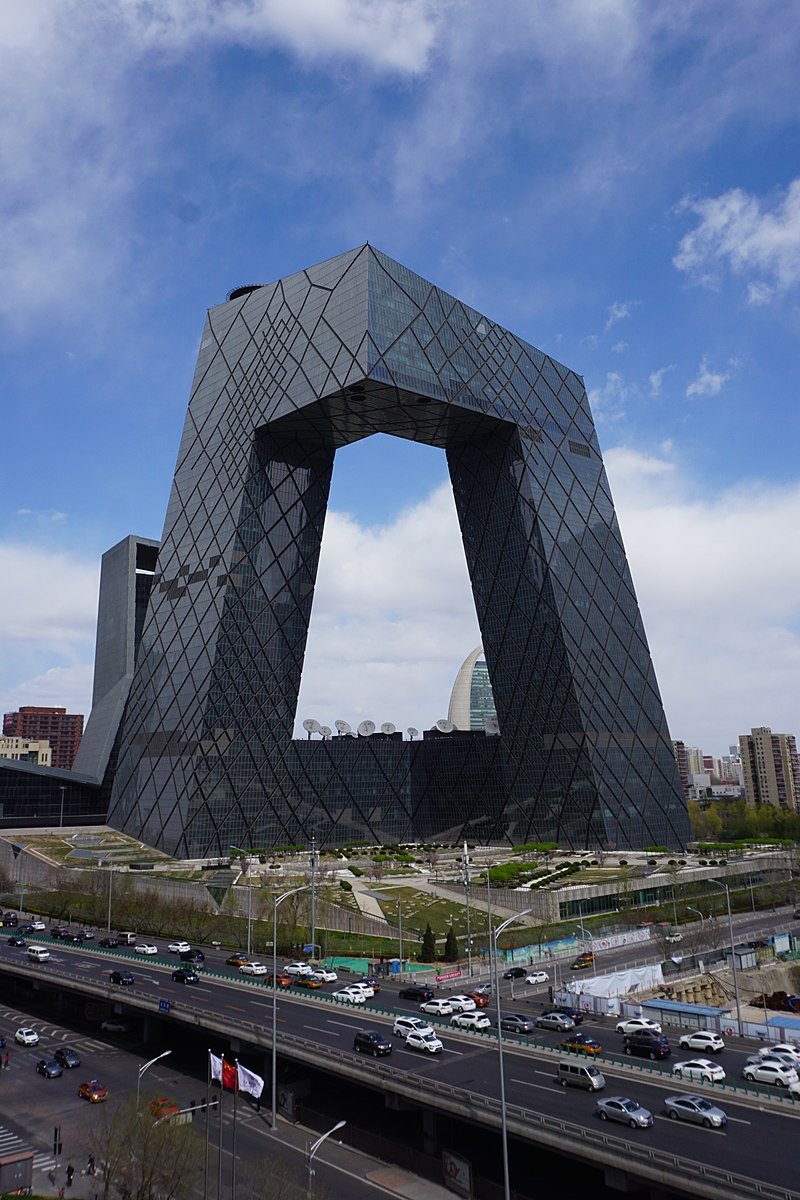 The “Big Pants,” as it is more commonly known, is one of just ten buildings in the city over 200m tall. Designed by Rem Koolhaas and Ole Schreeren, the towering loop of two leaning towers connected at the top and bottom by horizontal off-shoots is now such an iconic structure that it is often used in film and television to establish that the story is set in Beijing. 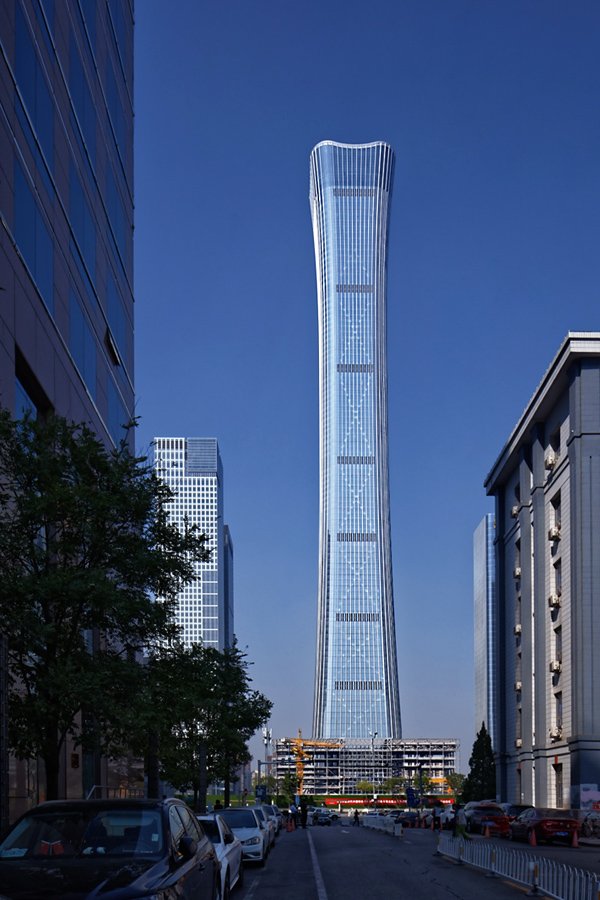 Standing at 528m, CITIC tower is Beijing’s tallest building and the tenth tallest skyscraper in the world. It also goes by the name Zhōngguó Zūn (中国尊) due to its distinctive skinny-waist shape that bears a resemblance to an ancient Chinese wine vessel. The office building serves as the headquarters of CITIC Group, but the basement level will soon contain a large shopping center and subway station. 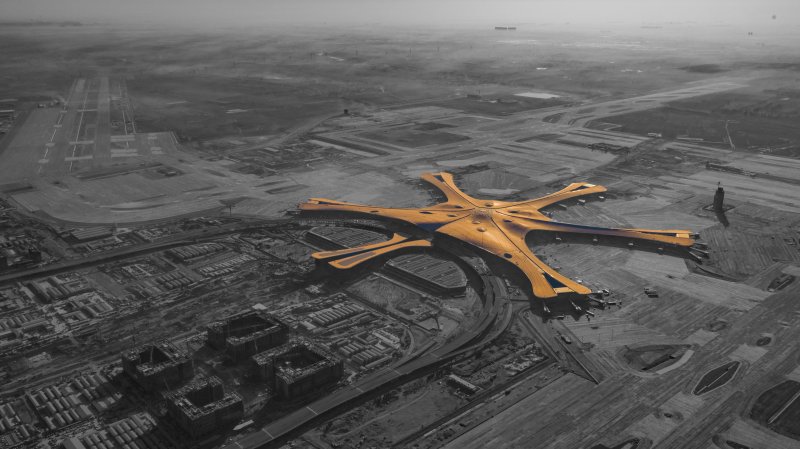 In an effort to alleviate the unceasing growth in traffic to and from Beijing Capital International Airport, Daxing was built just about as far south as you can go while still technically staying within the boundaries of Beijing. This star-shaped mega building was the last one designed by the late architect Zaha Hadid. The terminals, which cover a massive 700,000 square meters, feature an abundance of art, shopping, and dining, so visitors won't be nearly as bored as they are at Capital Airport. 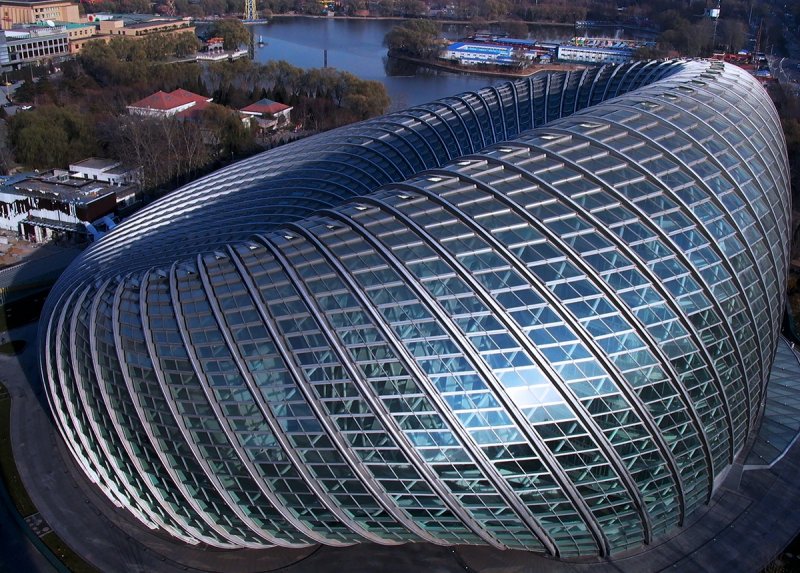 Is it a smushed doughnut? A double helix? Perhaps a sort of Mobius strip? Lying at the southwest corner of Chaoyang Park, the Phoenix Center is an award-winning building that leaves much up to the imagination of the on-looker. It was built to house Hong Kong broadcaster Phoenix TV and occasionally opens to the public for exhibitions that show off the work of artists in addition to the stunning view from inside. 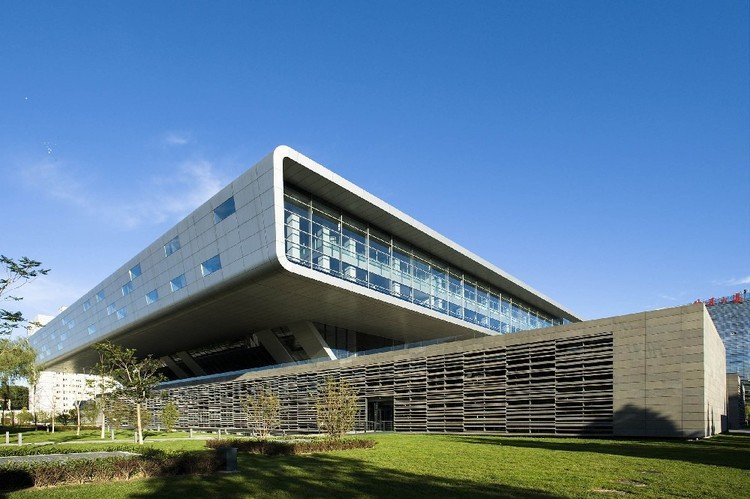 The original National Library building, built in 1987, would not look out of place in the China of old. Just after the Olympics, however, a sleek new building was added to the library campus. Appropriately, it somewhat resembles a giant silver book, or less appropriately, a ship from Star Trek, especially when the front windows are lit up at night (though you’ll have to venture to Fujian province to see a real USS Enterprise shaped-building). As it is a public facility, you can go see the inside of the building, and foreigners can obtain a reader card using their passport.

National Center for the Performing Arts 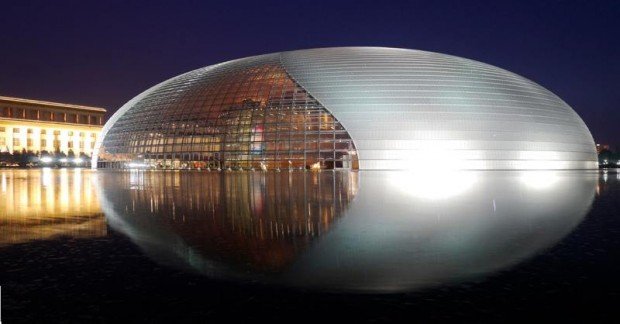 It’s not hard to see how this theater earned the nickname of the "Giant Egg.” With an opera hall, music hall, several art exhibition halls, and restaurants, the National Centre for Performing Arts is also the largest theater building in Asia. Besides the shape, its most distinctive feature is that its exterior transitions from glass to titanium and the surrounding reflection pool. 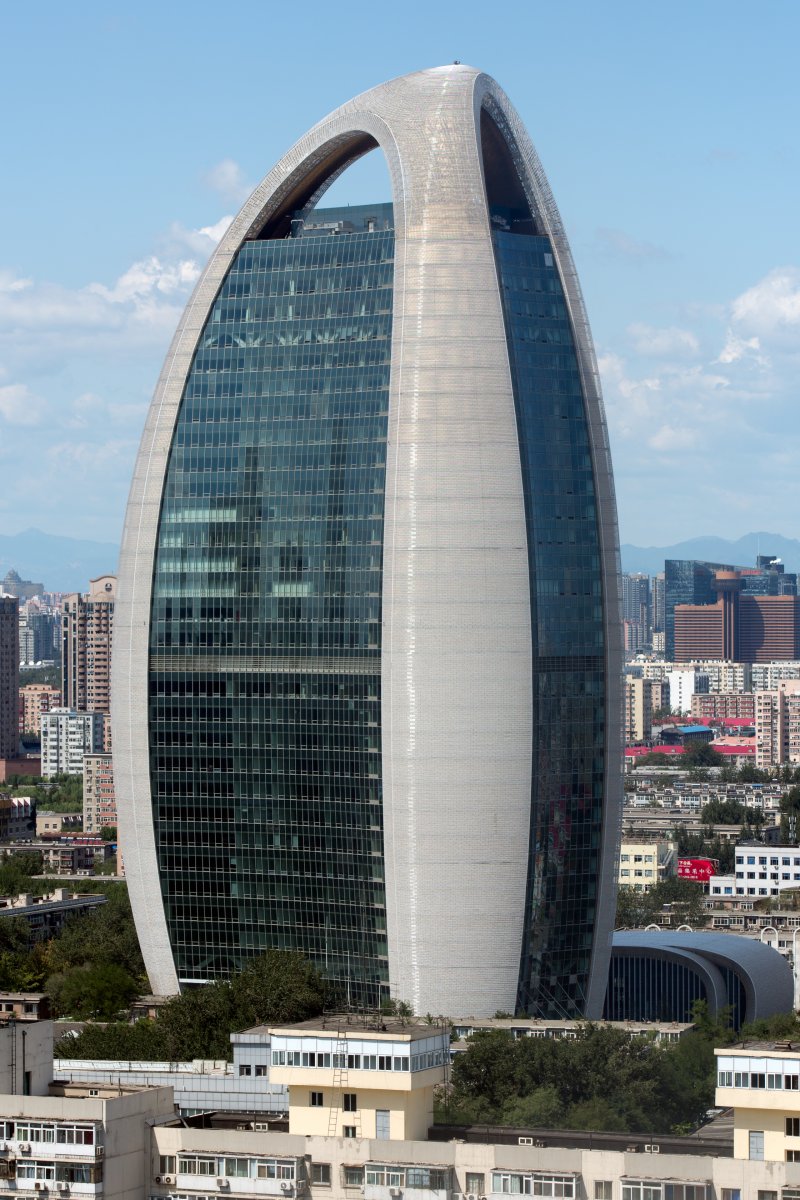 Not far from the Big Pants, the People’s Daily Headquarters caught a lot of flack in the design world while it was under construction due to its rather phallic appearance. Upon completion, though, it was able to shed the laughter and hold the city in awe with its shiny new façade that makes it look more like a wind sail. The original design included a helipad and planned for large satellite dishes to be placed within its hollow tip, but we like it just the way it turned out. 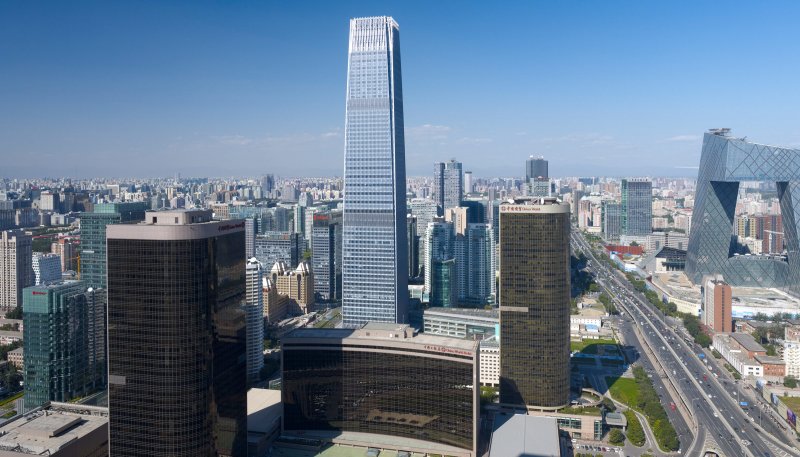 In contrast with the vase-like CITIC Tower, the second tallest building in Beijing has a chubby waist and thins out at both ends. Its crowning feature is, of course, its crown, which catches the eye when gazing across the skyline. Atop sits Atmosphere Bar, which may just have the best view of the city of any bar in town. 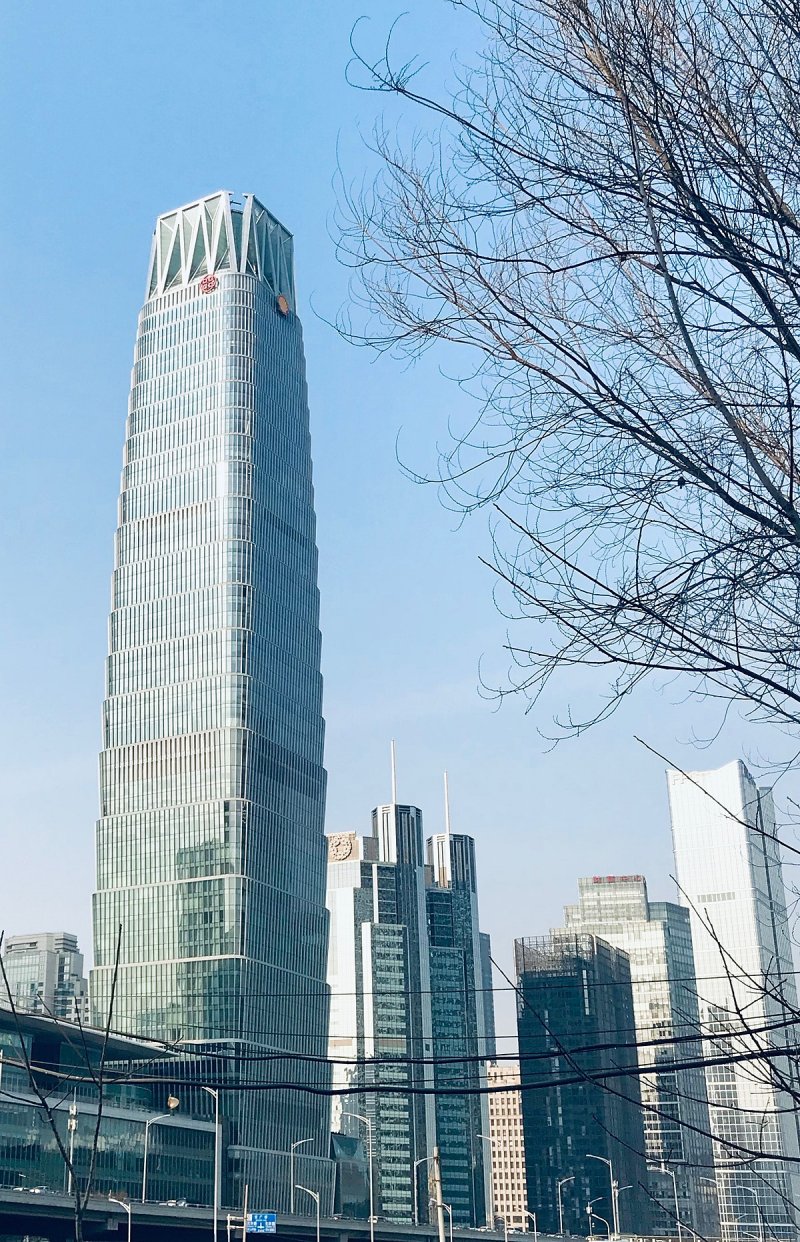 Completed in 2017, the third tallest building in Beijing takes a cue from it's aforementioned counterpart, with it's chubby waist making it look more like a big stalk of corn jutting out of the ground than anything. Home to offices and hotel space, CWTC 3B is best known as the building where boutique Hotel JEN and beer bar Beersmith are located. 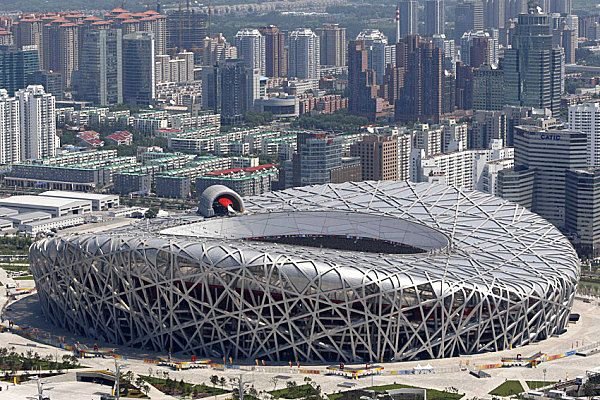 Better known by its nickname the "Bird’s Nest,” the National Stadium is recognizably by its steel beams that intersect and criss-cross like a bamboo forest. The stadium, which seats 91,000 spectators, was built for the 2008 Summer Olympics. Since then it has been used for major football games and other sporting events, and even saw reuse for the 2022 Winter Olympics and Paralympics (for the opening and closing ceremonies only this time around). 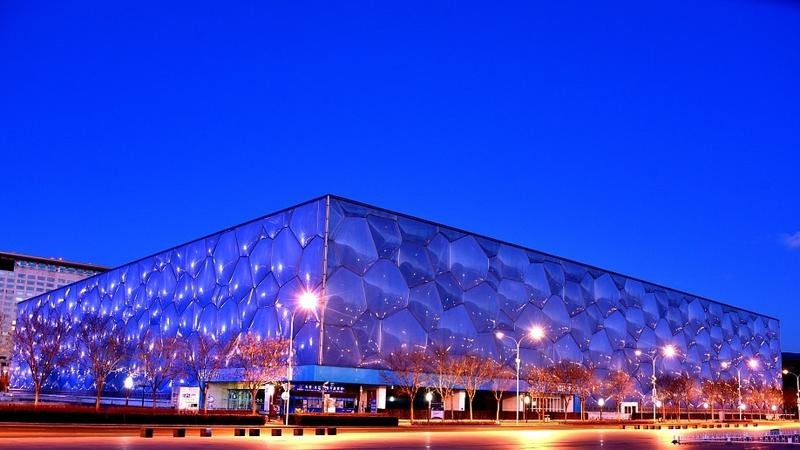 Another famous Olympic facility with a catchy nickname, the “Water Cube” is defined by its bubbly façade and was used for the Olympic swimming competitions and afterward was opened to the public as an indoor water park. It was recently renamed "Ice Cube" for the 2022 Winter Olympics, during which it was used for curling events. 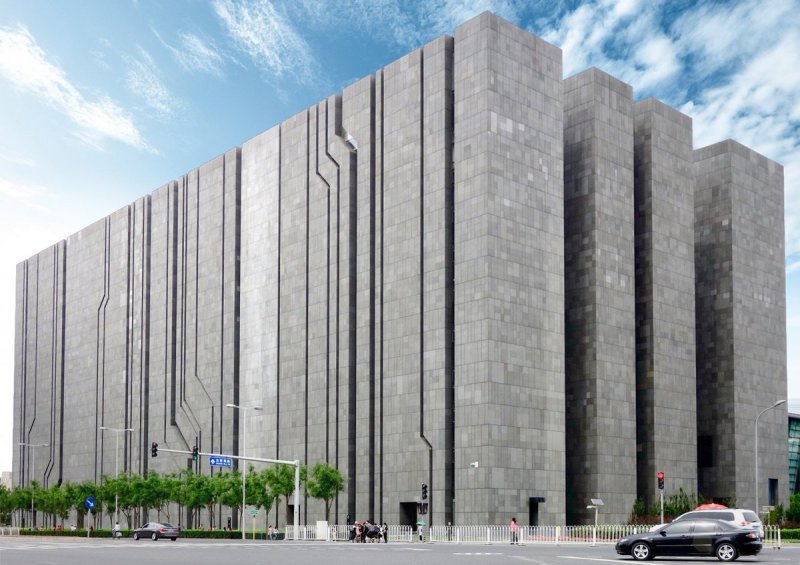 This giant data center, too, was erected to serve the needs of the 2008 Olympics and sits adjacent to Pangu Plaza and the National Stadium. From the west-side view, fittingly, the Digital Beijing Building's horizontal and diagonal lines evoke the circuits of a computer chip. From the south, one can see that the building is actually four separate sections, unequally divided and spaced. 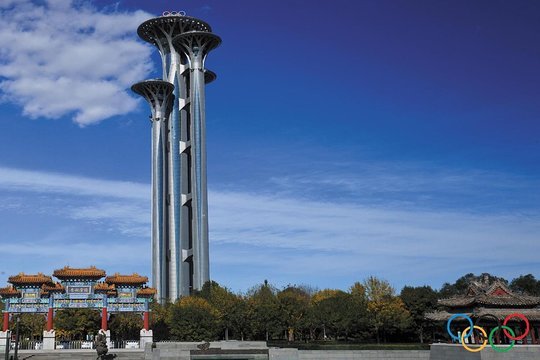 Overlooking Olympic Park, the Olympic Tower is made up of four connected towers that bloom into circular observation decks at the top. The tower was built to commemorate the 2008 games coming to Beijing, and its only functional purpose is to get a nice view of the city. 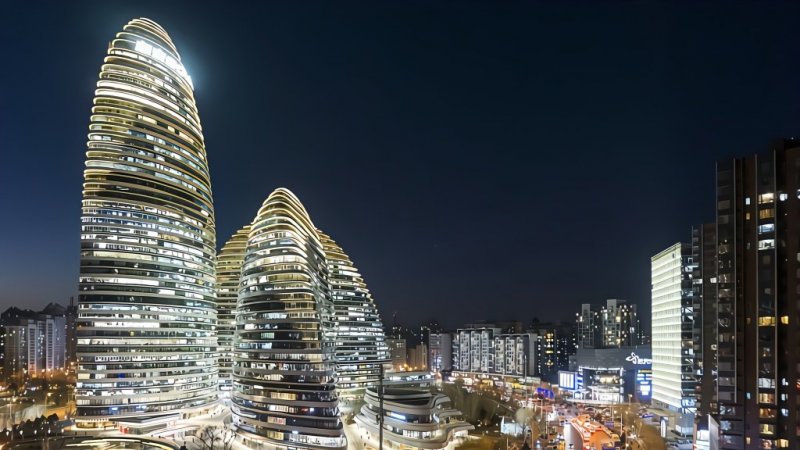 Wangjing Soho was designed by architect Zaha Hadid and features three separate shark fin-like buildings of varying heights and widths. At 200 meters, the tallest tower is notable as the world's fifth tallest building designed by a woman. 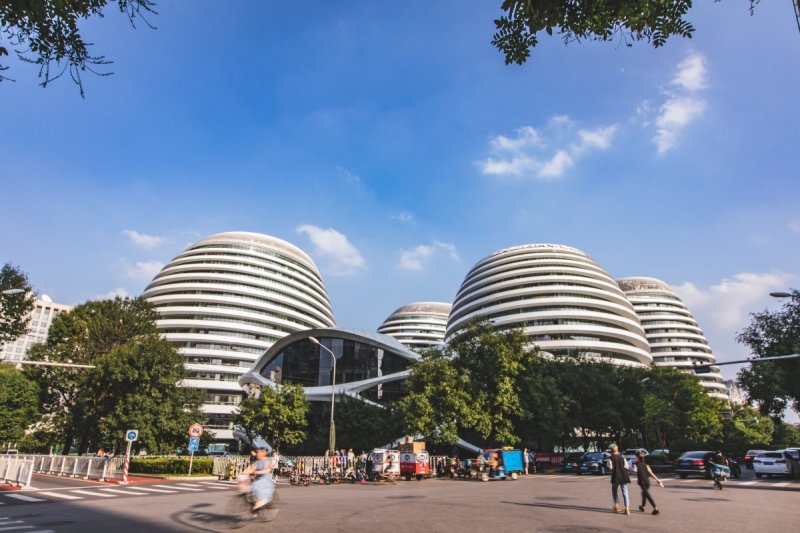 This massive Soho is another work of the late Hadid, and similarity can be seen in the vertical lines around the curvilinear buildings. Between its four towers lies a courtyard that has been known to host more than a few of our festivals. 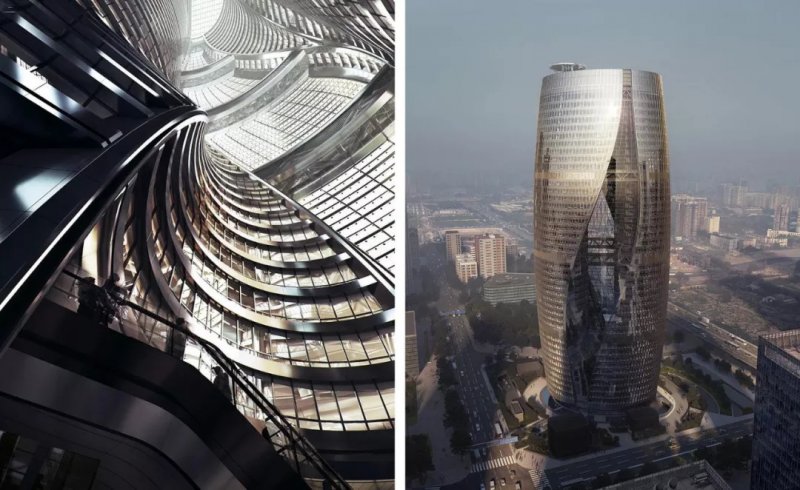 Zaha Hadid's final impression on Beijing, the Leeza Soho (丽泽) in Fengtai was completed at the end of 2019 and is a continuation of her fascination with curvilinear elements and design. At nearly 200-meters-tall, the atrium is the biggest in the world and is cleverly designed so that its 45-degree angle allows sunlight into all of its 46 floors, which mostly hold office space. 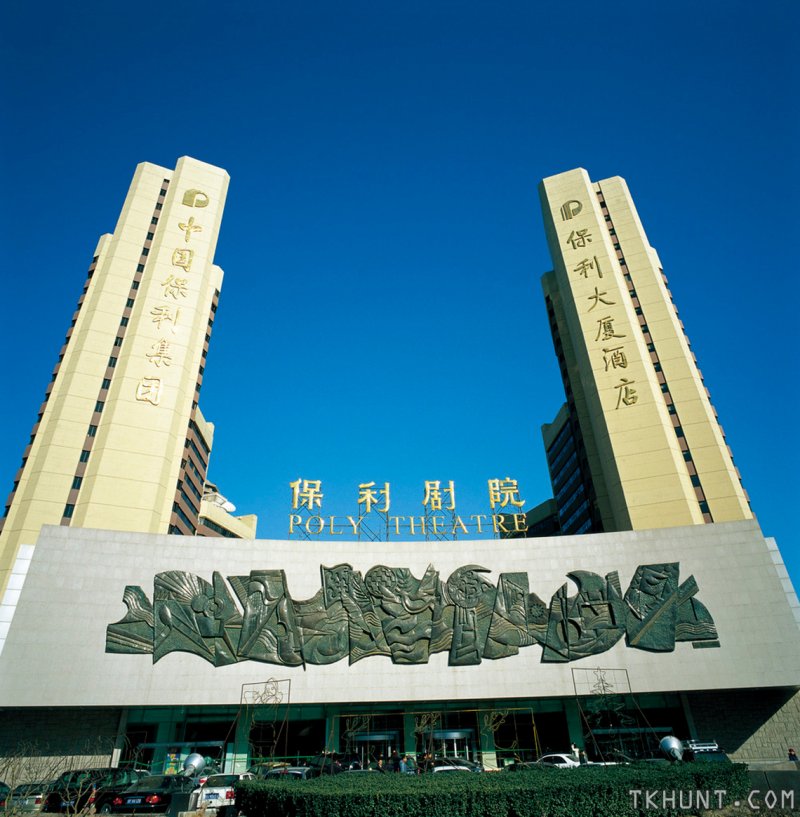 Built in 2000, Dongsishitiao's imposing Poly Theatre and sprawling bronze mural is likely one of the first buildings to catch the attention of visitors. The 1,400-seat theater houses plays, music, and opera throughout the year. 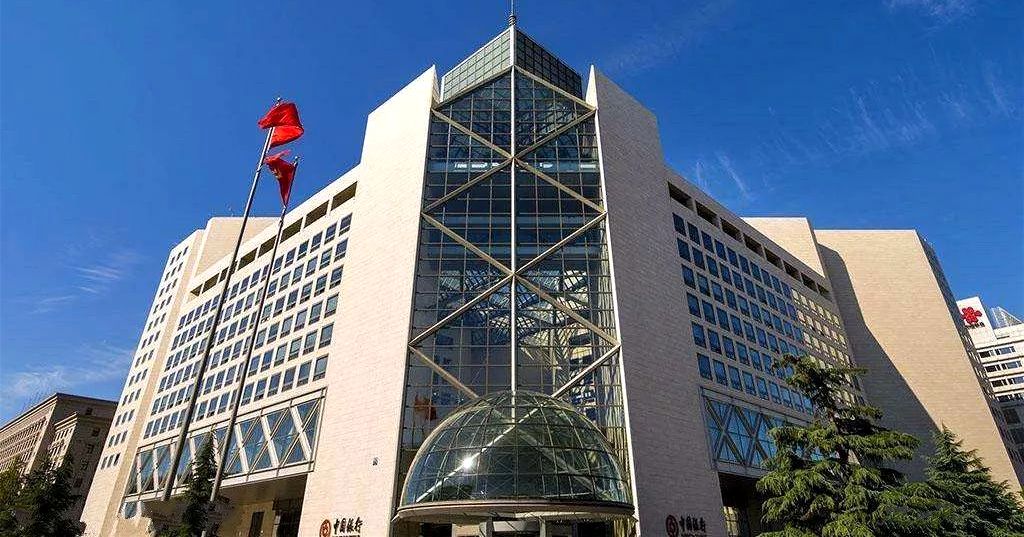 Designed by the late Guangzhou-born architect I.M. Pei, who died in 2019 at the age of 102, the Bank of China Beijing Branch (not to be confused with the headquarters in Fengtai) is situated in Xicheng. Completed in 1982, the bank marked Pei's first China-based project, 40 years after his initial departure, and eschews a skyscraper-type design for something more subdued so not to overshadow important low-lying structures in the heart of the Chinese capital such as the Forbidden City. Pei also leaves behind the Fragrant Hill Hotel in Beijing's northwest.