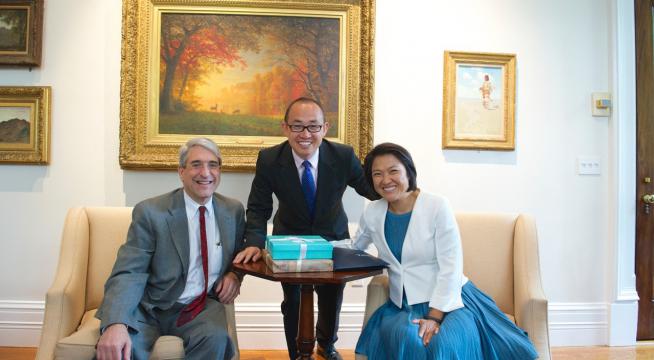 The SOHO China Scholarships is a USD 100 million initiative launched by the SOHO China Foundation to create financial aid for Chinese students to obtain undergraduate education at the world’s top universities. “Every person’s potential is like a hidden gem, and education is the tool that unlocks human potential. The SOHO China Scholarships aim to provide the best possible educational opportunities to the most outstanding students from Mainland China, enabling them to maximize their potential in their contribution to mankind，" said SOHO China Chairman Pan Shiyi.

Yale University has longstanding ties with China. Yung Wing, China’s first student to study in the United States, was matriculated at Yale in 1854. Yale was also the first university in the United States to teach the Chinese language. “This gift will help top Chinese national students access a Yale education today and for generations to come. The SOHO China Foundation’s extraordinary generosity will encourage outstanding students from China to apply to Yale — and assure them, should they be admitted, that we will meet their full demonstrated need for financial support,” said Yale University President Peter Salovey.

On the occasion of this signing with Yale University, the SOHO China Foundation urges China’s top students to apply to leading international universities such as Harvard and Yale. These are schools with need-blind admissions policies that accept students regardless of socio-economic background, and provide need-based full financial for students who qualify.